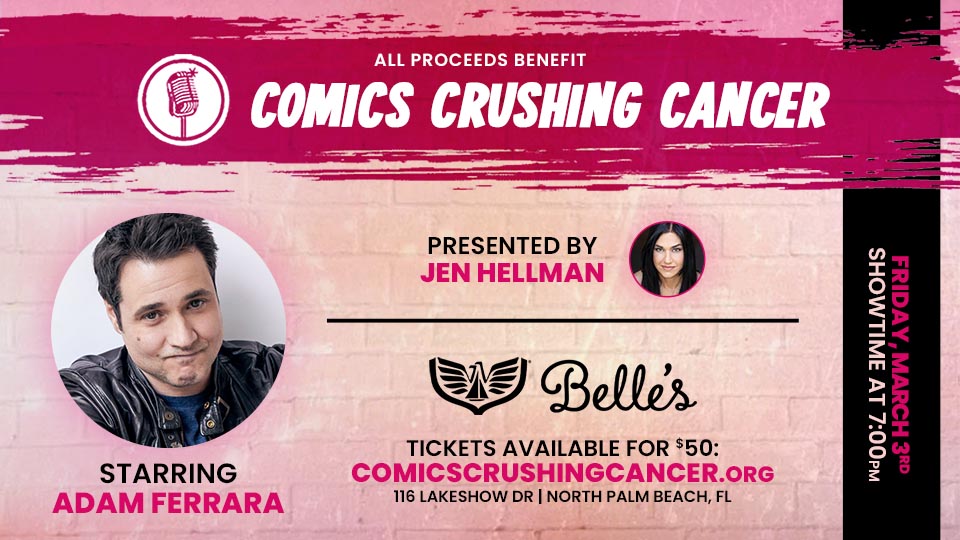 Join us for our biggest show of the season when Adam Ferrara takes the Comics Crushing Cancer stage at Belle’s in North Palm Beach!

Adam Ferrara is an Actor, Comedian who Entertainment Weekly dubbed “Hilarious,” and co-hosted the critically acclaimed BBC sensation, Top Gear US, for six seasons. Some of his TopGear highlights include jumping a ‘76 Coupe de Ville Cadillac 46 ft in the air, getting a Ferrari F12 Berlinetta up to 180mph, hang gliding a mustang off a cliff and driving one of the original 1966 MK II GT40 which won Le Mans. He starred in the AOL series “In the Drivers Seat with Adam Ferrara,” sponsored by Jaguar and Range Rover and was an online host for “The Barrett Jackson Collector Car Auction.”

Growing up on Long, Island Ferrara got his love for muscle cars from his father who could fix anything while Adam’s only job would be holding the light.

His new podcast, The Adam Ferrara Podcast is a breakout hit and considered a “must listen” by Hidden Remote. His new comedy album Now Available, It’s Scary in Here, debuted number one on iTunes, while his album Unconditional, was Interrobang’s People’s Choice of Album of the Year.